Hello Girls
I have been asked by Shirley to advise you that owing to  the recent bad weather the Committee are considering cancellation of the meeting on Saturday.
The main roads in and around York are now very passable and buses are running as normal.
I think the main problem will be the car park of the Folk Hall and I am going to have a look at it tomorrow but I can't think that they have either the manpower or equipment to clear such a large space.
A final decision will be made on Thursday and members will be informed via the blog, e-mail (if they have it) or phone using a cascade system.
If you here nothing then you can safely assume that it is going ahead and I will see you there.
Posted by York Embroiderers' Guild at 14:51 1 comment:

I thought everything was going too well - I totally forgot to publish notices  for next months meeting so here are the things I was supposed to remind you about:-

Competition.         Icicles.  Stretch your imaginations girls - lots of opportunities to be sparkly - you can use any format and any technique.

Raffle.      There will be raffle at this meeting; prizes will be donated by the Committee but I am sure any other contributions would be gratefully received.

Greetings cards.       If anyone makes greeting cards of any kind could they please donate one or two for sale to help with Guild funds.
Posted by York Embroiderers' Guild at 21:29 No comments:

This should be the final installment of the November meeting - I told you we had a busy old time!!

Blow Your Own Trumpet

This is a table where we encourage members to bring work that they have completed or are part way through so that we can see what everybody is doing at home - we are like all embroiderer's everywhere and like to see and admire others work. 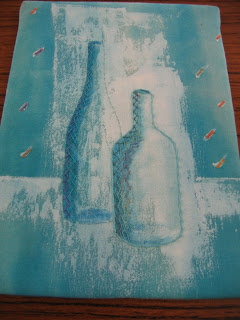 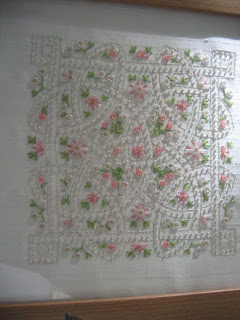 This is Helen Webster's very delicate stitched and beaded piece - it is very beautiful and my photograph does not do it full justice. 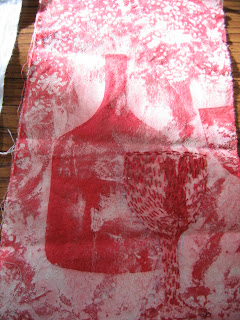 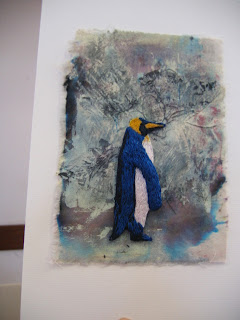 These two pieces are the work of Viv Stamford - the red bottle is a as yet uncompleted sample from Maggie Smith's workshop and I really didn't look closely enough at the time but I am suspecting that she has used the plastered technique as a background for her rather delightful penguin.  Clever!!!!!!! 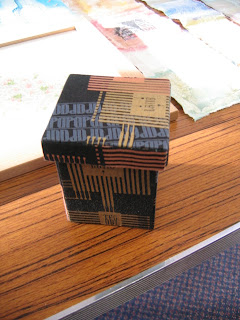 This is my (Chris Beavers) contribution  - I started  this box at the box making workshop with Tracy Franklin.
Unusual fabric worked rather well on this chunky little box - even if I say so myself! 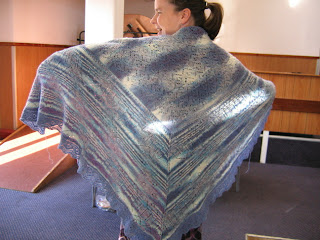 Finally in this section is a beautiful knitted shawl worked and modelled by Cluny Chapman.  The wool was also 'grown' by Cluny via her small flock of Shetland sheep. 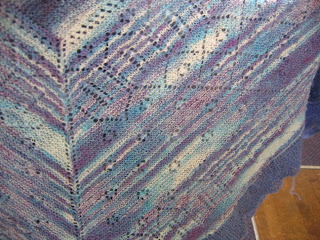 That concludes this section - sincere apologies to anyone I have missed.
Name Badges﻿
This section is to highlight the wearing of name badges at the meeting to help new members or those like me who have little senior moments when names just escape them totally.
I thought I would look each month and feature particulaly unusual/clever/beautiful/amusing name badges and I am going to start this month with one which qualifies as probably the biggest but also very clever.  The owner of this name badge is Elaine Hubery and I think it is just fantastic! 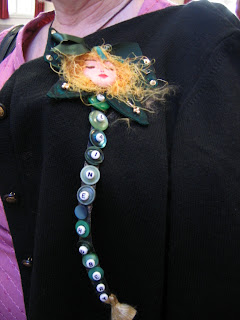 ﻿Scarves for Breast Cancer
A Huge Thank you !
At the last meeting or the meeting before, Judith Johnson, one of our members appealed on behalf of a Breast Cancer Charity - they were attempting to encourage people to knit  a scarf approx  5 feet long in an effort to get enough scarves to metaphorically 'wrap' around the City walls. The scarves when all collected in at the end of November will be auctioned to raise money for Breast Cancer - our members responded very generously and they brought in their scarves to this months meeting.  Here are just a selection of them - apologies to anybody whose scarf is not featured  but rest assured that your work is greatly appreciated. 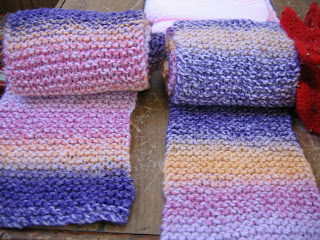 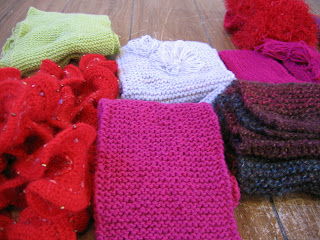 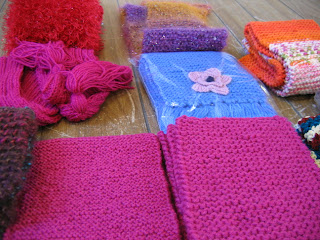 The next meeting is called a Member's day - this is where we try to organise something for the members to do instead of having a speaker. It is a very social meeting allowing you to mix with different people with whom you may not normally know and/or meet; this can be  acheived by having mini workshops led by 10/12 members as tutors and up to 10 members as their pupils.
Here are the workshops being offered this year.
﻿﻿﻿﻿﻿﻿﻿﻿ ﻿﻿﻿﻿﻿﻿﻿﻿
<> 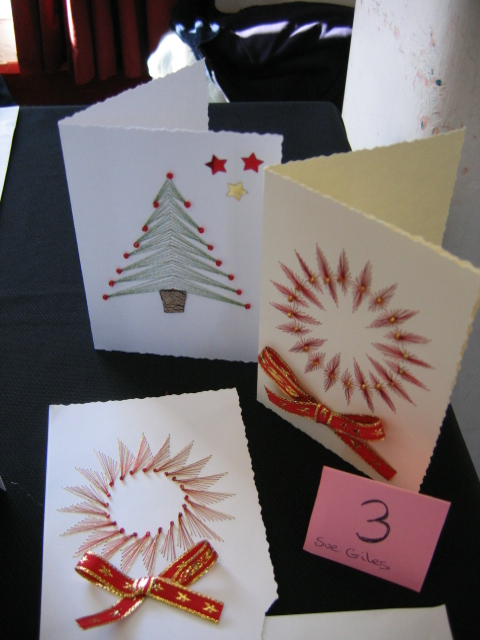 There is also a further workshop on small folded boxes suitable for small gifts being offered by Kay Warnock but I forgot to go back to the table to photograph them. Sorry Kay.

And Finally - the Chairperson.


This is our excellent chairperson, Shirley who is under a misinformed impression that she is 'in charge'  and I have to accept that on the meeting day she holds us altogether BUT I have to ask myself who has sole charge of our access to the internet on our behalf!!!!!!!!!!!
Enjoy your tea Shirls!

﻿
Posted by York Embroiderers' Guild at 15:36 No comments:


- this is a very busy three quarters of an hour,

I tried to photograph members choosing books from the extensive Library but could get nothing but backs and bums and therefore did not dare publish!!!!!!!!!

This month we had a cake stall to help raise funds - well done to all who either baked or bought or both!

At  2 o'clock we were brought to order by the Chairperson (Shirls) and after the business meeting - of which more in a later post -  we came to the main event.
Our speaker this month was a delightful young textile artist called Serena Partridge﻿ - she has lots of talent and a wry sense of humour which was evident in both her talk and her work.
The official title of this  talk is Follies of Fashion but she began with a little background information about herself which included the beginnings of her work in miniature ie miniature gardens in Horticultural Shows and also her Art College course which encouraged problem solving both of which skills have served her well in her work.
She took her inspiration originally from a junk shop which sounded like a real old fashioned emporium which had potential to supply inspiration for her lifetime - sadly it burned to the ground and so she turned to a pair of long kid evening gloves as a starting point and the rest as they say is history.
Her minature gloves are characterised by exaggerated long fingers and extremely small exquisite stitches and this exaggeration and quality of stitch is a thread (excuse the pun!) which runs throughout her work.
She has also used  wigs,  dresses,  boots, cakes, stockings  and umberellas as starting points: she zips about from century to century but always the finished article makes you either smile or wonder at the detail.
Serena likes to recycle wherever possible, using old materials, lace and trims in her work:  her re-use of materials is most evident in her choice of framing materials which are ecelectic but always surprisingly appropriate and usually made by herself - this is where the problem solving comes in most useful.
She completed her talk by showing us some of her residency work done with school children and explained that her current work has returned to gloves but she is investigating the stories behind the gloves and their owners.
I have got to say that this was an excellent talk - a good way to spend Saturday afternoon!!!!!!
Questions were asked of Serena  and answered - then we all needed a cup of tea.
﻿
﻿

﻿This brings me to the end of the meeting and I think a good time was had by all.
Please watch out for Part 3 which will include Notices, Blow Your Own Trumpet, Name Badges, Scarves for Breast Cancer and how Shirley thinks she is in charge!
Posted by York Embroiderers' Guild at 12:43 No comments:

We had a really good meeting today, at least I thought so! - there was so much going on I think I will have to do this post in two stages.

Saturday Morning
I will go through the day chronologically: we started at 10.00 o'clock with the Baltimore Quilt group doing some more on their blocks: Jeans teaching topic today was ruched flowers - I managed to miss the actual teaching (too busy talking to others) but I did manage to snaffle the hand out.

Please check out the Baltimore Quilt page as I am going to put up todays photo's there so we can see progress.


Whilst this was going on on one side of the room various members were occupying themselves with their own work at tables scattered around - this is a very social kind of a morning with a tremendous amount of chat going on as we can see from the photo's below.
﻿

Whilst we were enjoying ourselves downstairs the committee took themselves upstairs to work on  our behalf having a meeting and here are the photo's to prove it!! 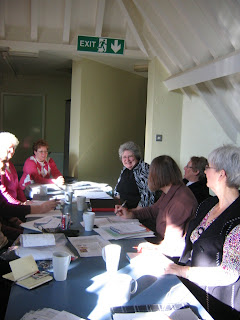 ﻿This is pretty much what happens during the mornings before the branch meeting in the afternoon.
Posted by York Embroiderers' Guild at 20:28 1 comment:

Welcome to the inaugural message from the City of York Embroiderers' Guild.

We had a most enjoyable meeting on Saturday 2nd October when our speaker was Maggie Smith. She gave us a most entertaining PowerPoint presentation entitled 'If it doesn't move, it's still life'

She spoke most eloquently as to how she keeps revisiting themes and ideas in this case 'Still Life'   She showed examples of still life that had inspired her and then how she interprets this with technique which incorporates plaster into her work.

Plaster may seem to be a brittle substance which may seem incompatible with stitch - however it is mixed with paint and glue which gives it more flexibility and Maggie's work show how stitch and plaster work very well together.

We are asked to bring cakes for a cake stall at the next meeting ( 6th November 2010) and to make a card/s for the December meeting (4th December 2010)  - both of these requests are to help boost branch funds.

Will those members who are going to lead workshops on Members Day (December) please bring their completed idea and requirements list to the November meeting.

Christmas competition will be icicles - please put on your thinking caps!!!!!!!
Posted by York Embroiderers' Guild at 21:38 3 comments: