Even though Christmas may still seem a long way into the future, as this is our December meeting, it's Christmas themed.

We have no speaker but instead work on a mini - project. In theory it can be finished in the afternoon, but with all the other things going on - Christmas competition, tea and magnificent Christmas cake, Bran tub, raffle, sales table, and plenty of chatter - not everyone finished what we were working on.

It was an ingenious little decoration or bag, made from triangles, and though I didn't finish mine in time (see above!) this is one that was completed. 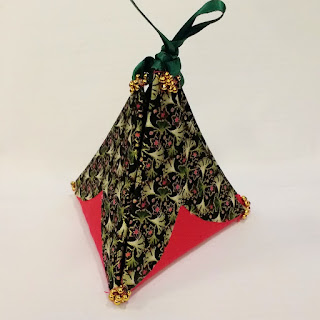 The theme for the Christmas competition was Flora and Fauna. The winner is chosen by popular vote. 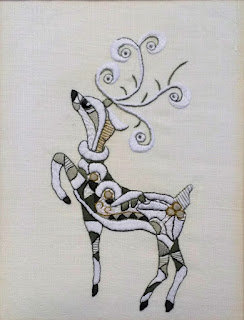 This cute little chap won the prize. Made by Carole, who said she had never won anything before!

In other news - the branch now has a facebook page. It's an open group,  so can be visited by anyone, with the intention of publicising our branch. If you're on facebook, find it here.

Wishing you a Merry Christmas. See you next year.