Our speaker this month was Cluny Chapman. Her talk was on the history of blackwork and whitework. Cluny is an exceptionally skilled embroiderer and her talk included examples of pieces of work that she has made. Cluny was taught embroidery by her mother, Ann Mary Johnstone, who herself amassed a collection of historical embroidery over many years, and was also an accomplished embroiderer.


Cluny's talk covered the history of blackwork, and the changes in style and fashions over the years from Tudor times. Whitework and blackwork are both techniques taught at the Royal School of Needlework, and we saw contemporary examples of both.

When the talk moved on to whitework, we were able to see actual examples from 17th century onwards, and discover the changes in fashion. There were even examples of 'recycling' where 17th century work had been inserted into 18th century work - a trend which was apparent in many samples.


The talk was very interesting covering not just techniques, but social history from Tudor times to modern day, and being able to see actual worked examples, and marvel at the fineness of the work was wonderful.

The exhibition in June was very successful. There are some pictures on the Exhibition page.
The Visitors' Choice for the favourite post card was announced as Shirley's puffins. 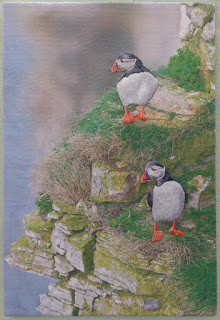 Stitch club will be starting up in October, where the theme will be Altered Books. This is being led by Pauline. 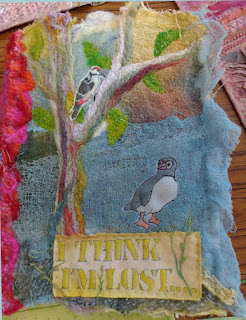 A reminder that October is the AGM and the meeting will start at 1:30. Volunteers are needed to stand for committee positions including Chair, Secretary and 'general' committee members.