Our talk today was the first of 2017, but we were very rapidly transported back in time 950 years.

The talk was given by Heather, one of our members. However, in another guise, she is also one of the embroiderers on the 'Battle of Stamford Bridge Tapestry Project'.

The tapestry itself was started in March 2015, with a view to creating a piece similar in style to the Bayeux Tapestry, to commemorate the Battle of Stamford Bridge (the village near York - not the football ground) which immediately preceded the Battle of Hastings. 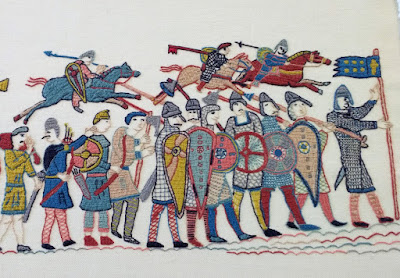 Heather gave us an overview of the state of the country leading up to the battle in September 1066, and of the four challengers to the throne. She was an excellent speaker and made the history very interesting - and humanised it, in the same way that the images on the tapestry do - we see the characters as individuals rather than a mass of people.

Several members of the project were at the meeting, working on individual panels, and we were able to hear how the design of the fifteen panels is progressing. From the initial tracings....


... to the design transfer on to the back of the panels, and then stitching with fine cotton to transfer the design to the front of the work...


Appletons crewel wool is used for the embroidery, with grey for the chain mail, red for the banners and purple for the king. The outlines are stitched first using either stem stitch or outline stitch, and then the filling is made using Bayeux stitch, a stitch used in the original Bayeux tapestry and which is economical in its use of thread, being a combination of laid threads and couched threads.

Heather suggested the book 'The Bayeux Tapestry Embroiderers' Story' by Jan Messent for more detail on the stitches, but do also take a look at 'The Battle of Stamford Bridge Tapestry Project' website which has a video detailing how the project came into being and how it is progressing. It includes footage of our branch Co-Chair Shirley Smith, who is Lead Embroiderer on the project, but was unfortunately unable to be at the talk (Prince Charles also gets a mention!).


It was a very interesting and engaging talk.

In other things . . .
There is still a desperate need for more people to be on the committee. Please seriously consider if you could help, and get in touch with one of the current committee members for more details.
Posted by Diana at 16:07 2 comments: