The Speaker at this month's meeting was Mary Ann Dearlove, one of the embroiderers involved in stitching The Fulford Tapestry.

Mary Ann brought the entire tapestry with her and it took up most of the stage. The pictures show just some of the tiny details which make up the overall work which depicts the Battle of Fulford in 1066. This is the 'forgotten' battle which took place before the more famous Battles of Hastings and Stamford Bridge at a small river ford on the edge of York.


Apparently, so many dead bodies fell into the ford at the site of the battle that the ford became known as the 'Foul Ford' which over time became corrupted to 'Fulford'. We don't just do embroidery at Embroiderers' Guild meetings!

Mary Ann also talked knowledgeably about the stitches - mainly stem stitch, laid stitch and open buttonhole (for the chain mail) - and the learning curve when sourcing the best wool yarns and natural dyes to create the vibrant colours used in the tapestry.

It took a small group of dedicated embroiderers nearly seven years to stitch the tapestry; fund raising is now being undertaken to  create a display stand for the tapestry and it is in search of a permanent home. Finding a venue is proving quite a challenge. To read more about the tapestry and the vast amount of time and research which has gone into the making click here. A very interesting talk.

Other Things (in no particular order)
At the September meeting in addition to the Ida Barber Trophy (awarded for the best original design) there will be a competition - with prize(s) as yet unspecified - for the best name brooch made using the York Embroiderers' Guild badge as its centrepiece. 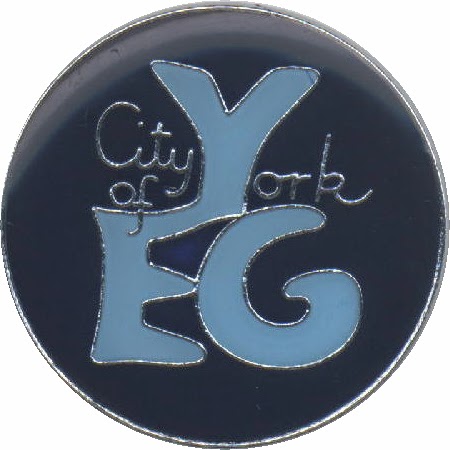 Name badges are really helpful to the committee, so please try and make one.

Subscriptions are due in September. Subscription is made up of two parts. The major part which will be £30 goes directly to Embroiderers' Guild Headquarters to support the charitable aims of the Guild. The branch subs will be £10. This money goes towards the costs of the monthly meetings and includes room hire and the cost of the speakers (who are generally excellent - scroll back through the blog to see what a wide range of topics we have covered this year). Unfortunately, it isn't possible to be a member of the branch without also being a member of the Guild. The treasurer asked if we could remember to bring our cheque books and pay by cheque, as this makes banking easier.

The Regional AGM is on 11th October 2014 in Scarcroft. The current branch project needs to be completed in time for the AGM. More bodies (stitched and embroidered) are needed to go with the beach huts. These should be finished and brought to the September meeting and hopefully a working party will get everything together for October. I think there is an element of surprise to this project, so I will post photos when the 'Grand Reveal' happens.

It was proposed and accepted that the Branch AGM will take place in October not just this year, but in subsequent years.

Next year - 2015 - is exhibition year. Our triennial exhibition will be held in the Guildhall in York in June 2015. Dates are still being finalised. Fundraising ideas to help towards the cost of staging this exhibition are needed.

If I got this right, there are still places available on the Residential Summer School this July. Details are in the Regional Handbook or at this link on the Guild website.

And last, but not least, the Chairman's Award was won this year by Celia. The criteria was to use the Die Cutter and incorporate these cut shapes into a finished piece. Celia was inspired by a visit to the Royal Armouries museum in Leeds.


Next year's theme is still to be announced.