As promised ..... the answers to the book cover competition at our recent exhibition, together with images of just some of the entries.

1. THE SILVER CHAIR
2. CHARLOTTE’S WEB
3. THE SECRET GARDEN
4. THE TIGER WHO CAME TO TEA 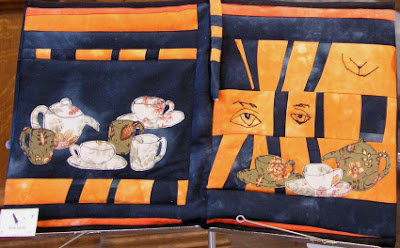 5. THE TALE OF PETER RABBIT
6. THE LION THE WITCH AND THE WARDROBE 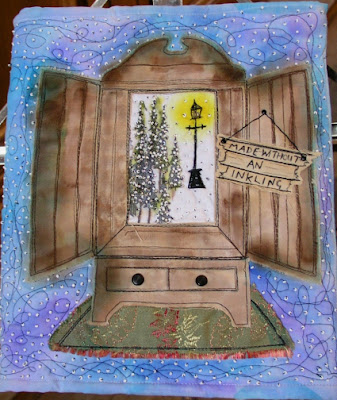 7. TREASURE ISLAND
8. BLACK BEAUTY
9. WHEN WE WERE YOUNG
10. ALICE THROUGH THE LOOKING GLASS
11. SWALLOWS AND AMAZONS
12. THE OWL WHO WAS AFRAID OF THE DARK
13. OLD POSSUMS BOOK OF PRACTICAL CATS
14. THE GINGERBREAD MAN
15. RATBURGER
16 ALICE IN WONDERLAND 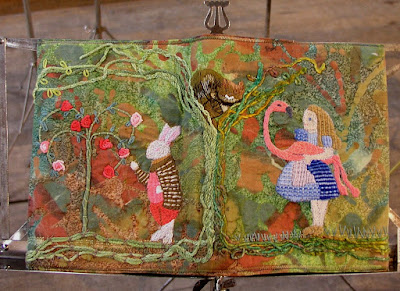 There are more images from the exhibition on our exhibition page. Click here, or on the 2015 Exhibition Tab above.

Our speaker today was Jane Smith who gave a very interesting talk about her developing love of Japanese embroidery and how she has, over many years, mastered the traditional techniques and is now branching out to create her own designs.

The piece above shows the shading effects that can be achieved by careful laying of the flat silk thread while stitching.

These braids are in fact fine embroidery stitched to give the impression of braids and are one of the stages which must be mastered to achieve a full repertoire of Japanese embroidery skills.

This piece layered up stitching to give a more three dimensional effect and to allow the colours underneath to just show through, to add to the feeling of depth.

Jane brought the 'exam' pieces she stitched for each stage of her training, together with embroidered obis and fabric samples. Click on the link above to see more images of the exquisite work.

Other things
The exhibition was a success. The prize for best book cover was won by Christine Addley and Roberta Harte's piece based on war won the best in show. Answers to the book cover competition will appear as a separate blog post.

Bookings for workshops with Isobel Hall, Hannah Lamb and Helen Young were taken. Hannah Lamb's workshop will now be at Hartrigg Oaks, not the Folk Hall.

1st August has been designated 'Big Stitch' day, and events will be taking place at the Quilt museum, Hobbycraft and the Castle Museum in York, and at St John's church in Market Weighton. Events start at 10.00am

There were proposals for branch outings in 2016 to The Bayeux tapestry, Macclesfield Silk Museum, and the AGM in Manchester.

Our branch is also rising to the challenge of being more 'outward facing' and will be participating in several projects, including the Big Stitch mentioned above, and also contributing to the celebration of  Capability Browns 300th anniversary - a national event, and introducing a mentoring scheme to keep traditional embroidery skills alive.

Attention was drawn to the National members' competition where the theme this year is 'Looking Through'. Again, full details can be found from the Members' Room pages of the main Embroiderers' Guild website. Closing date for entries is January 29th 2016. There are prizes!!

Our branch competition this month was for the Chairman's Award. This year the theme was 'A piece of jewellery' and was won by Isobel G.


At the September meeting the competition is the Ida Barber trophy for the best original design.

Sue requested that any pieces of embroidery which are being stitched for the Regional AGM, should be brought (completed) to the September meeting so that they can be combined to create our entry.