I have to confess to a certain amount of frustration as this point but am determined to get something up on this blog about the Baltimore quilt and it's progress - the frustration is entirely with myself and my technical limitations - no matter how I try I cannot add to the Baltimore Quilt page so progress is going to be shown here on the main page - better here than on my hard drive.

NOVEMBER
I started to collect photo's in November and here are some of them:-

﻿ ﻿
﻿That's all for now - will put up more photo's in day or two once I've calmed and gotten over my hissy fit with the Blog!
Posted by York Embroiderers' Guild at 15:19 No comments:

In my first posting about January's meeting I said that the CEO of the Embroiderers' Guild was coming to talk to our members - as it happened the meeting was the following Saturday (a fact I omitted - sorry) and as I understand it the meeting was well attended by members from all over the region including members from our branch.  The following brief  report was sent to the blog from Sue Giles who attended the meeting and covers the salient points - I am sure that more information will be available at the February meeting from members who also attended.
We had a meeting with Terry Murphy in response to a letter sent by our regional chairman.  He explained to us about his role in the Guild. He is a Management Consultant who has come in to help the organisation change, not to change the organisation and had been recommended.
We were told Jane Sweet has resigned and hopes to travel and do other things.
Terry has written an independent and regenerating programme for the Guild, there are no systems within the Guild that worked, and the Guild was in danger of collapse or serious harm if action was not taken, but said the staff have been brilliant under the circumstances and they and the Treasurer worked very hard, for the Guild.
The Guild is moving to a house in Walton on Thames and Terry has negotiated special rates with the B B and restaurants nearby for the members and it is also near the  station.  This move could be temporary or permanent so is open ended, but the Guild had to move.
The building has 2 floors and at the moment on the ground floor there will be a permanent room for the collection, a library, bookshop and workroom - all spacious.
The main thing is the collection and the top 1000 pieces will go with the move and be available to travel round the country. The rest will go into secure permanent security.  Lynne Sygenza has offered to help with the move of the collection much to the delight of the members at the meeting.
Terry told us the systems in the Guild were very out of date i.e. the computers and will need starting from scratch to be more efficient and up to date, and said the staff had to be relied on very much for their knowledge and information.  All the staff now have contract including the Treasurer, none of them had before, there are also new contracts with the phones etc.
The YE has not been run efficiently and has been losing money, but this will be altered as they are our future, there are only 670 YE in 67 branches.
Terry will be having a meeting with the staff, trustees, and all the regional chairman’s.
To finish can I say Terry said it was difficult to meet the Guild’s expectations with its charitable obligations and the members who had their own expectations, but we did feel we could go away and rely on him to help bring things forward.
May I just remind members that the next meeting is on Saturday February 5th    See you then
Posted by York Embroiderers' Guild at 15:56 No comments:

We did have cake and very good it was too!

On behalf of all members and Committee a huge thank you to Liz Lumb - it really was appreciated.

We did have a Competition based on Icicles - we had 7 entries as varied as always. The entries are placed anonymously , numbered and then members vote for which entry they like the best by placing a coin in the accompanying envelope.  The entry with most coins (not the greatest value) win 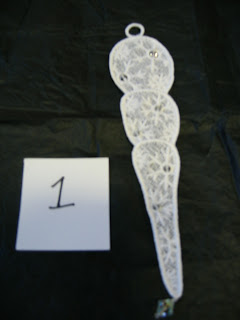 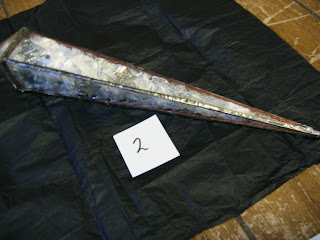 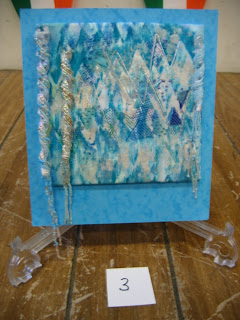 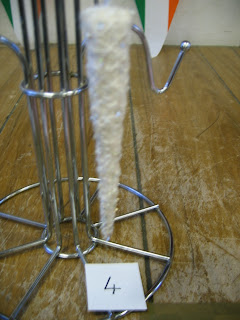 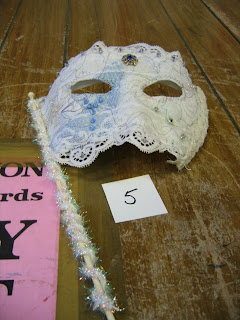 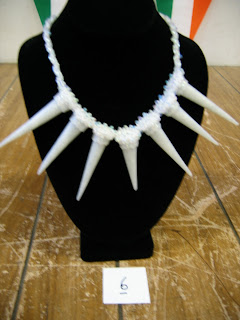 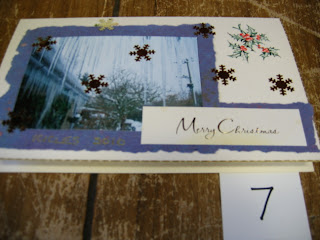 ﻿As I said we had 7 entries - apologies to number 4 and 6 as the quality of my photography is not good.  The winner was number 1 and the maker was Pam Drury.  At this time I am not going to publish the remaining entrants as I do not have all that information - I know the makers of no's 2, 3 and 6 and will happily update the blog when I know the makers of the other entries - please let me know.
Greeting cards

We asked for members to donate hand-made Christmas cards for sale at the Christmas meeting but when that meeting was cancelled we extended the remit to include any cards so long as they were hand-made. As usual the membership rose to the challenge and there was an extremely good selection of cards on sale -

I throughly enjoyed Saturday - I hadn't realised how much I had missed seeing people at the beginning of the festive season - we had to cancel the December meeting owing to bad weather conditions and somehow the celebratory nature of that meeting almost acts as a harbinger (is that the right word?) of Christmas and we had to wait an extra week for this meeting as New Years Day fell on our normal meeting day.

However we all gathered and another year begins with a very busy meeting - I loved it - plenty to see and plenty of people to talk to and plenty of good creative stitching going on.

In the morning we had the Baltimore Quilt Stitch Club (more of that on the dedicated page) and the normal social stitching and talking group.

After lunch the room was prepared and the main event began:- there was a relatively quick business meeting - the main notices were as follows.

Workshop        Tracy Day  with Tracy Franklin
Saturday 26th March at (I'll get back to you on that one!)

Members were asked for volunteers to demonstrate at The Quilt Museum on Saturday 29th January morning and afternoon.  Sessions are 10.30 - 1.00 and 1.00 -3.30  It is Viv who is trying to organise this and I think she has a space at the morning session - if you can help could you please e-mail/phone Viv Stamford - those people who have volunteered she needs to know what you are going to demonstrate for the Quilt Museums' publicity.

Bead group will meet as usual - second Wednesday of every month 1.30-6.00ish and that will be this Wednesday.  Numbers are getting a little low and the group may have to fold so if you would enjoy beading with like minded people then come along - non members would be welcome also.

Jean Graves asked that members who had taken Baltimore squares to return them completed for the March meeting ( that annoucement stirred me into activity!!!!) - she would like the quilt to be completed by Summer 2011.

Terry Murphy, the acting CEO of The Embroiderers' Guild is going to have meeting for our Region in Scarcroft Village Hall  (on the A58 between Wetherby and Leeds) on Saturday   from 2pm -4pm.   ALL WELCOME

The Guild HQ is moving from Hampton Court to Walton -on-Thames  - more information on their website.

At the November meeting we brought the scarves we had been knitting for Cancer Research - Judith Johnson, who was the lady who encouraged us to support this very worthy cause, reported that she had taken 51 scarves from our guild and she updated us with the information that the scarves were selling very well and they had raised over £4000 to date.
So thank you one and all who either knitted or bought or both - it's always good to start the year with good news.

Our speaker on Saturday was Michelle Horton who works in the Harrogate branch of Duttons for Buttons.  Now I imagine that everybody who was in that room has been to Duttons on many occasions and will have had the same experience as myself and that is that you are rarely disapointed and unable to find a button or habedashery suitable to the task in hand - Duttons for Buttons is one of the most useful shops in the area.
But this talk was an historical look at the humble button and it turned out to be not humble at all but a mark of staus through the ages.  The talk covered buttons (no pun intended) up until the 18th century - they started as decorative items and evolved into functional items and over the centuries have been made from a whole host of materials.   I am always pleased when I learn something new from a talk and I am pleased to report that I learned lots of interesting facts from this one and I hope that the second part of the talk - 19th century to the present day - will turn up on our programme in the future.

In honour of the subject matter of this meeting one of our members Anne B-Z who originated in London and is very proud of her London heritage brought along her Pearly Queen outfit which is a work in progress.    We ran a small competition to guess the number of buttons on the outfit for fun.

The winner of the competition was Diana Barrett who guessed 1987 and the actual number is 1940.
As you can see there is space for more buttons and Anne has said it is a work in progress so perhaps by the time of the Buttons talk Part 2 she may have added more and we can have another look at it.
Posted by York Embroiderers' Guild at 15:15 No comments:

Hello everyone - please accept my apologies for being so tardy with the blog over the festive season but I along with everyone else have been rather busy.
However that is sufficient grovelling and may I on behalf of the Committee and myself wish you all a happy and healthy 2011 and may you all reach your stitching ambitions!

The meeting is a week late this year owing to New Years Day being on Saturday 1st January and looking back on previous posts I forgot to remind you of this fact  - I don't think I am the right person for this job as I am developing a memory like a sieve and the Friday before the meeting is a little late  but whatever - it will be my resolution to be more consistent  this year with the blog.

On to tomorrow - owing to the December meeting being cancelled it has been decided that the Raffle will be carried forward to the Easter Meeting.
We will be having Cake (kindly provided by Liz).
We will be having the Competition - Icicles if you remember.
We will be having the Greetings card sales tables - please bring along any cards you have made - they can be of any technique and to celebrate any occasion. (I am bringing a Christmas card, a Thank You card and a couple of  all purpose cards with no message - just to give you an idea).

The talk tomorrow is about buttons and Anne B-Z is bringing items to reflect buttons and her London roots which may involve a small extra competittion - more details tomorrow!!!!!!!!

Please remember to wear your name badges as I will be on the lookout for one to feature on the blog.

There will be stitch club and more work on the Baltimore Quilt squares in the morning.

Hope this covers everything - please let me know if I have forgotten anything.
Posted by York Embroiderers' Guild at 13:07 No comments: