Our speaker this month was billed as Captain Rummage from the Cone Exchange. Many of us were unsure what the talk would be about. It turned out to be a highly entertaining and amusing talk, that showed how just a small request can grow into a major community project.

It started with a cone of thread in a teabag manufacturing part of Betty's and Taylor's factory in Harrogate. The cone turned in to an angel, which then grew into a host of angels. These angels were then sold and the proceeds used to provide equipment for an afterschool gardening club. And this idea of using industrial waste for crafting just grew. The Cone Exchange was created. Items which could be recycled such as spectacles or old mobile phones could be collected by community groups and then exchanged for vouchers to 'spend' on cones and other waste items - selvedges of ribbons, unwanted boxes, hessian sacks from coffee beans (this is Taylor's after all). Other businesses got involved and the products available for recycling grew. Lids from buckets of animal feed were converted into butterfly bunting. All that was needed was a little ingenuity to see how these items could be used.

And so workshops were started, and the whole project just snowballed. There is now a scrap store where anyone can buy these items. Details of opening times and more can be found here.

The talk was very entertaining and thought provoking. A real treat.

The Easter competition which was for the best piece made from a commercial design was won by Sharon for her exquisite embroidery of a little bird. 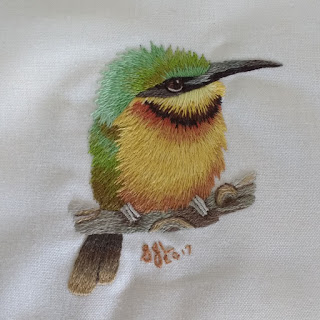 The design was taken from Trish Burr's book 'Colour Confidence in Embroidery'. 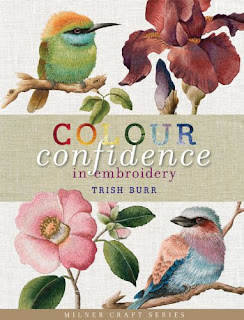 Regional Day will be on June 9th, with speakers Serena Partridge and Nicola Jarvis.

Young Embroiderers met over Easter and created a collection of flowers which will be displayed in York later in the year. 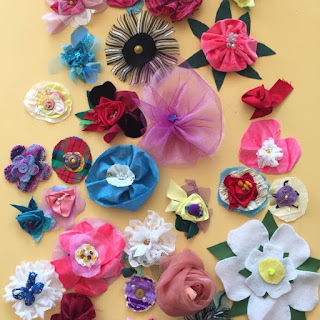 Do remember to wear a name badge to the next meeting!