Our meeting on Saturday, October 7 was our AGM. We welcomed two new committee members: Lilian Muir (treasurer) and Heather Cawte (secretary), and we awarded a bursary to Jess Grady.

Following this, we had a very interesting selection of short talks by members. Eight brave souls spoke for 5-10 minutes on an embroidery subject of their choice.

Jose Gledhill spoke about inspirational City & Guilds tutor, Jean Bowe. She read out a poem found by Jean’s husband after her death, a very witty look at City & Guilds from a student’s point of view. She couldn’t tell us who had written it, as there was no name on it.

The following speaker, Sheila Wade - who was sitting next to Jose - announced that she knew exactly who had written the poem, as it was hers! It would be lovely to be able to publish it here or on our Facebook page. Sheila spoke about how she became interested in modern embroidery through the TV series by Diana Springall, especially the projects from Julia Caprara and Jan Beaney.

Nikki Brown shared some beautiful pieces with us, which she had chosen because they reminded her of particular friends.

Pauline Twyman showed us her dolls in hoops, and told us about the Dolly Birds group and the Basic Babes competition.

Celia Ankers brought along some of the distressed and unfinished pieces of church embroidery she has rescued over the years. She is known in many churches now as “the lady who won’t let you throw anything away”! These are some of her treasures. 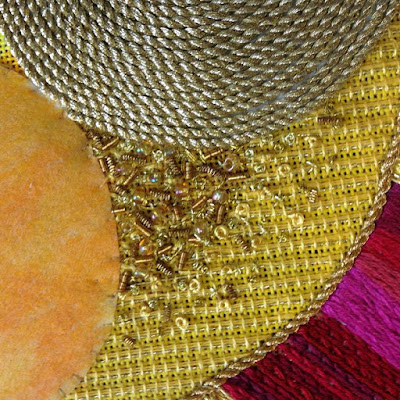 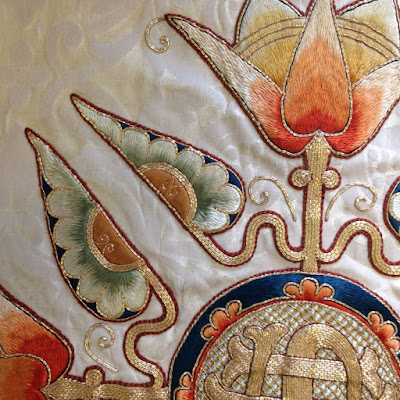 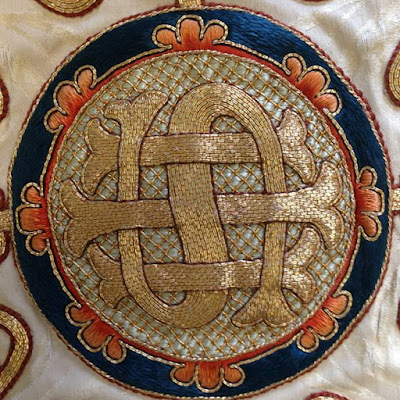 Josie Storey illustrated her fascination with the stitching and textiles produced by ethnic groups such as Native Americans, showing us pieces inspired by a visit to the Hancock Museum in Newcastle upon Tyne.

Jackie Shearman brought along a display about her glove making, which she has enjoyed ever since learning it during her time at Bath College.

Finally, Jean Graves told us about the Fair Trade movement, and what she learned from her trip to Vietnam, to look at the projects producing items for the Traidcraft catalogue.

Everybody enjoyed the speakers, and asked if we could repeat this kind of afternoon in future. It proved that we not only have a huge pool of knowledge and skills in our branch, but that these are on a huge variety of subjects.

(And I must add my thanks to Heather for providing the words for this blogpost, and Pauline for the images, as I wasn't able to be at the meeting. It looks like I missed a real treat.)
Posted by Diana at 17:33 1 comment:

Hello! This is just a little reminder that, as the October meeting includes the AGM, we will be starting a little earlier than usual at 1:30pm
Posted by Diana at 16:27 No comments: